posted by AlexB
Nov 25, 2012 183551 0 0
Share
So we are in Eminönü, the heart of the old Byzantine Empire, on the shores of the Golden Horn – a natural estuary that got its name from the shining golden objects thrown by the Byzantines into its waters while fleeing the city under the Ottoman attack. If you pay attention for a second you can feel its heart beat: boats, seagulls, passers by, cars, trams, the call of the mosques blended with the call of the Egyptian Bazaar’s merchants, the lined fish restaurants on the lower part of Galata Bridge, the smell of boiled corn, the chestnuts (oh, those roasted chestnuts!) and the grilled fish served in a bread loaf with salad and onion from the rocking boats 24 hours a day! 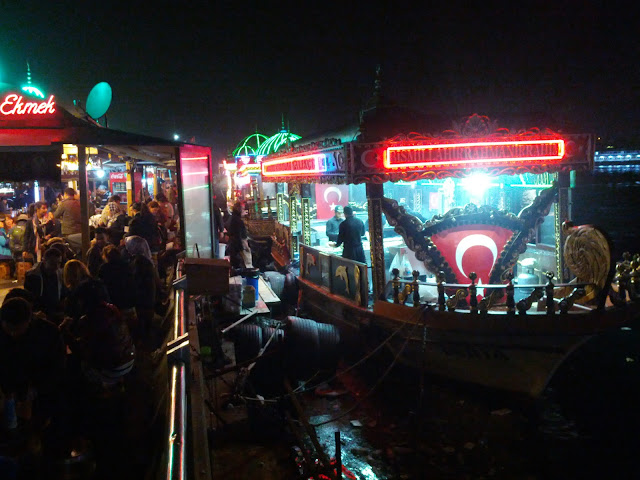 Just grab a fish sandwich (balık ekmek), have a sit at the tiny tables and pretend you are “Alice in Wonderland”! The show is guaranteed!

Cross the busy street via the underground passage packed with people and merchandise into the square of the impressive Yeni Cami (New Mosque – that is not new at all). Its construction started in 1597 and is a wonderful piece of Ottoman imperial architecture. To its right you’ll discover the Egyptian Bazaar or the Spice Bazaar – one of the most fascinating places in the world. It is here where I always buy my spices and scarfs, apple tea, dried fruits, nuts, hazelnuts, walnut sausage (pestil cevizli sucuk) – a sort of sausage made by walnuts captured in a sweet jelly. If you are here for the first time, have a walk and make yourself an idea, then choose. On the right side of the Egyptian Baazar you’ll find the historic coffee maker Kurukahveci Mehmet Efendi and further down the Hasırcılar alley on your right side (civic number 14-16) you’ll have the best pastrami in Turkey: Namlı Pastırmacı.

From the Orient Express to Where the Sultans Stroll 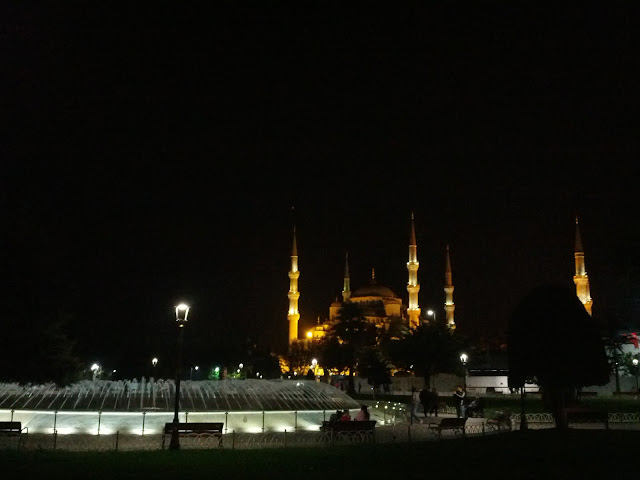 Happy so far? You have not met happiness yet! As the bazaar is closing down, it is time to relax. Where? At a hammam or Turkish bath. Follow the alley behind the New Mosque that will take you to the Sirkeci Railway Station (the terminus of the Orient Express line) and follow the tram line to your right going slightly uphill. The street is aligned with souvenir shops with beautiful windows. At a certain point you’ll get in the wide square of Sultanahmet District that in the last years got a beautiful uplift (new infrastructure, paving, gardens and fountains). No wonder as it is one of the main attractions for every and each tourist to Istanbul: Hagia Sofia, Basilica Cistern, Sultanahmet Mosque (or the Blue Mosque), Top Kapi Palace, Turkish and Islamic Art Museum.

Hammam – A Stop in Heavens

Return to your path lead by the tram line along the Divan Yolu Cd. When you reached the next tram station Çemberlitaş by the Column of the Emperor Constantine (dating to 324-327), to your right you’ll see the entrance to Çemberlitaş Hamamı erected in 1854 by the great Ottoman architect Sinan. It is a wonderful piece of art and relaxation. It is not the only hammam I would go to but taking into consideration the time pressure  the convenience of its location and the cleanness I think it is a good compromise in spite of the high entry fee. Get a simple ticket, ask for the exfoliation glove, a soap and head to your cubicle at the upper floors. An employee will attend and guide you. 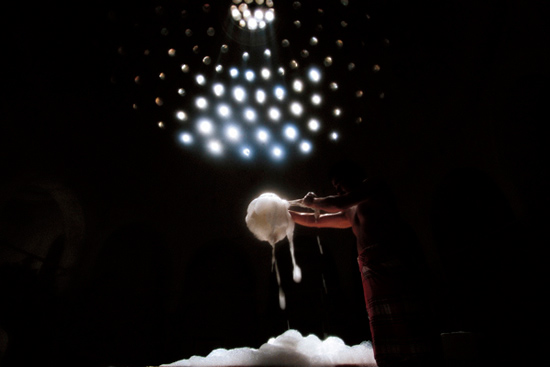 How to Bathe in a Turkish Bath

From now on you can imagine you are in Heavens. Leave your clothes, wrap in a cotton checked towel (peshtemal) and head down in your flip flops to the calendarium – the warmer room. From here you get inside the main area of the hammam. Nested under a huge dome pierced by round tiny windows that during the day filter the sun light into a bunch of colorful beams of light, in the middle there is a marble platform where lazy bodies melt in pleasure and lust. Take your space, rinse it with a splash of water and ughhhhhhh!… exhale. The marble platform is heated by wood burn fire bellow. Sweat starts to pile up and your pores dilate and open even more. Turn on the other side and observe the big beary masseurs giving foreign tourists an exfoliation and a rough massage. If you like what you see, just ask your favourite cub and you’ll pay him at the end. 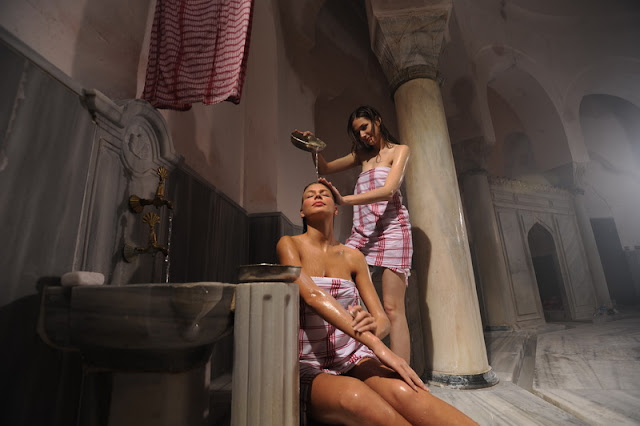 After the gentle exfoliation and massage head to the small basins hidden in the corners by arabesque shaped paravans. Laid back in the arms of lust and pleasure, wash of the olive soap foam by pouring water scooped from the basins with intricately carved metal bowls. If you believe you got enough for your skin, eyes and soul it means it is time for you to go out. In the colder room you will receive fresh dry towels and wrapped like Laurence of Arabia you will head towards your private cabin. Lay back and you can return slowly to the earthy beats, all purified. Jest before leaving make sure you leave some small change to the cabin assistant. In exchange he will water your hands with lemon water. Bliss. Nothing more, nothing less! 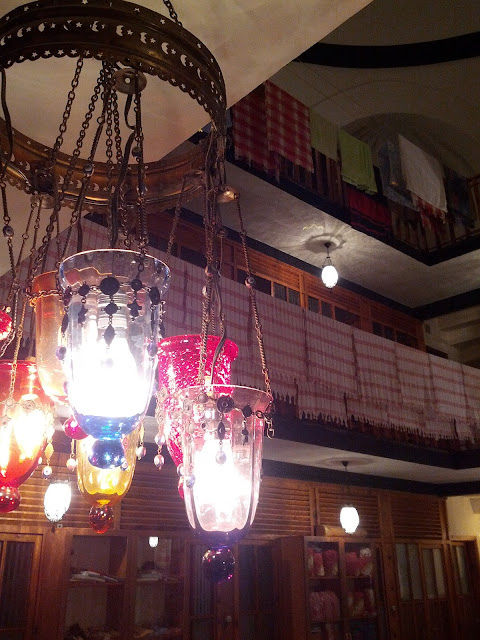 You may not realized but time flew rapidly. You may have spent easily one hour and a half inside sweating loads of liquids. Thus the next think you need to do is hydrate. In style, of course! Next door to the hammam there is a place that makes freshly squeezed fruit juice. Go for a large portion of orange or pomegranate and get a large bottle of water too.

Up the Genoese Hill

The clock is ticking. It’s almost 9 pm. Time to go where the locals go. Beyoğlu district. Hop on a tram and get off the first stop after the Galata bridge (Karaköy). From here look for the steep slopes of Galip Dede Street. Currently under transformation, this used to be a less fancy but charming street with hostels, music shops and cheap food places, now becoming a schmancy-fancy street, due to the high number of tourists and locals walking from the bridge and pier area to the upper posh grounds of Istiklal Street. On the left you can’t miss the Galata Tower – center of the Genoese community established here in 1261. 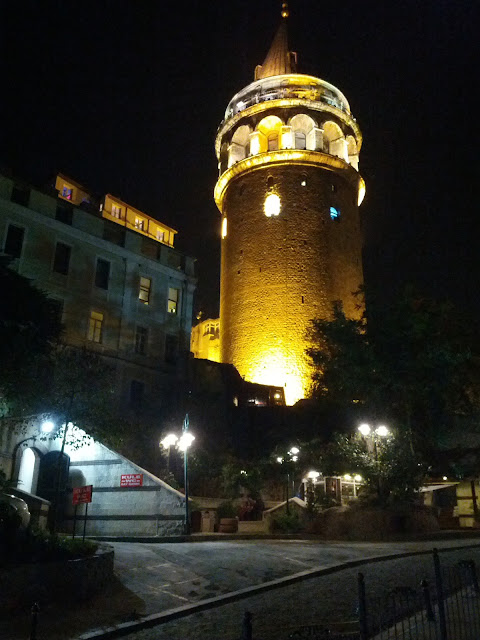 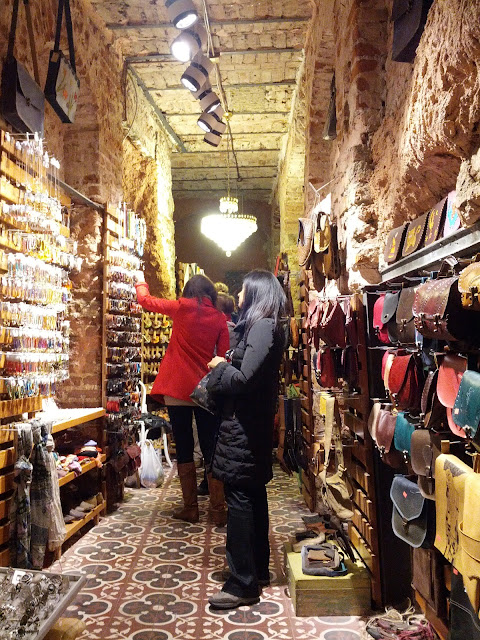 The Place to Be

Once you reached Istiklal Street you can either start your swanning for 3 km gazing at people, shop windows, magnificent architecture or you can sneak through the tiny side streets where the locals mingle around a cup of tea, a guitar, a lough and a water pipe puff. Unfortunately my favourite tea place just opposite Badehane in that 90 degree turn (just across Tunel) looks closed down forever. So, hurry up in case you still want to catch-up with the real spirit of Istanbul. 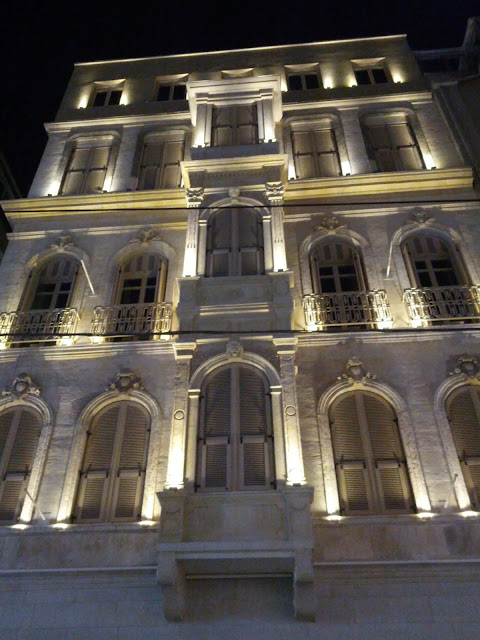 Wikipedia reports over 3 million people visiting this street every day during weekends and I can definitely recommend it to those who love “people baths”. Istklal Avenue is also a great place to buy Turkish music (modern or traditional, Sufi or Balkan rythms, they have it all). Here the shops close around 11 pm. So you can literally shop till you drop. In case you do, ask for another cup of tea in one of the side alleys or throw yourself in one of the pastry shops – another heaven. Baklava, cadaif, rice pudding, icecream … all beautifully presented and served with the best client oriented attitude I have ever experienced. 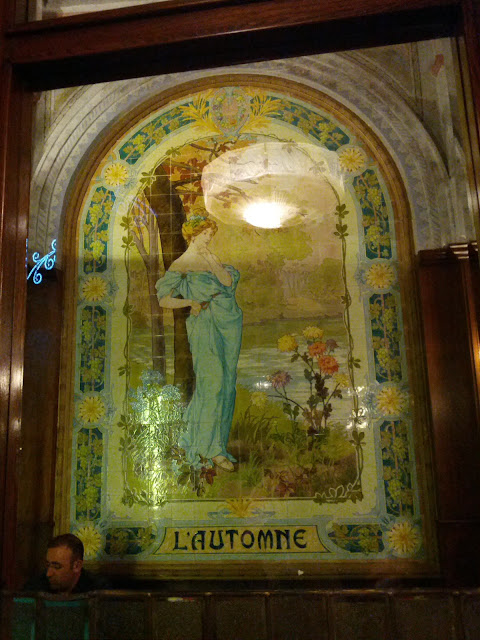 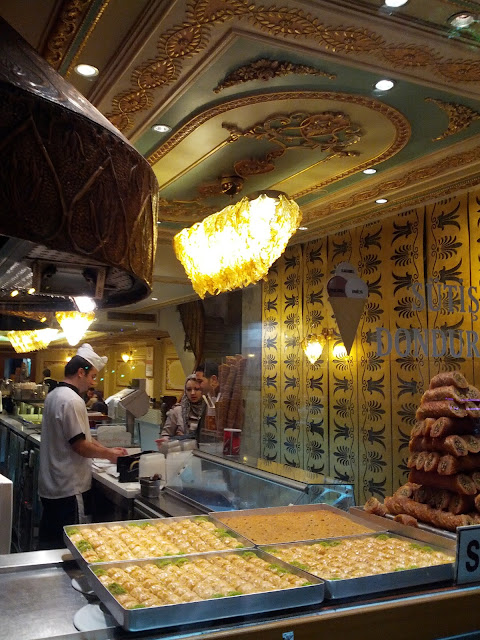 One of the oddest but also finest dessert I tasted was the Tavuk göğsü (“chicken breast”) – a Turkish dessert pudding made with chicken and milk. It became one of the most famous delicacies served to the sultans in the Ottoman Empire. Today you can try it for example at Emirgan Sütiş, a historic pastry at the end of Istiklal Avenue, opposite the French Consulate. I simply love it. 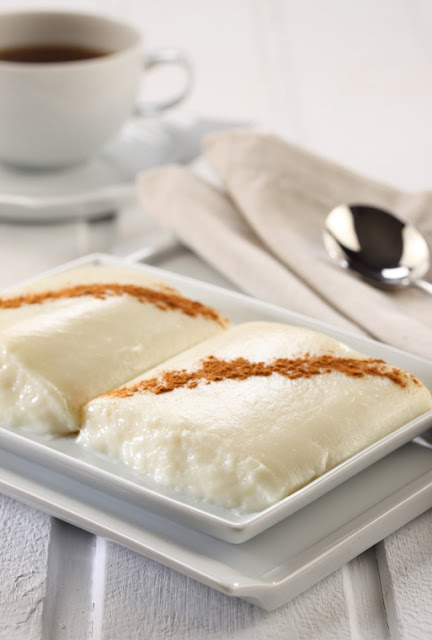 At this time (midnight passed) you have two choices: go partying at say Eski Beyrut (Old Beyrut) on Shantel’s Balkan and Turkish rhythms or head to the hotel for a full update of your day on Facebook and 3 hour rest before your departure to the airport.
It does not matter how much time you avail to spend in Istanbul. It will surprise you all the time as it keeps transforming and reinventing itself into an even bigger wonder of the world.

Northern Ireland is famous for it’s accent that to me it sounds half way between Irish and Scottish. One of...