posted by AlexB
Nov 18, 2012 112011 0 0
Share
Once upon a time there was a young and beautiful empress and queen at once in a big and mosaic like empire in the middle of the continent. The pressure of the court life, the intricate politics make her look for an escape and a slower pace oasis. Elisabeth (also known as Sissi), Empress of Austria and Queen of Hungary discovers during a visit the charming summer estate of the Corfiot literate Petros Vrailas Armenis. She immediately buys the property. 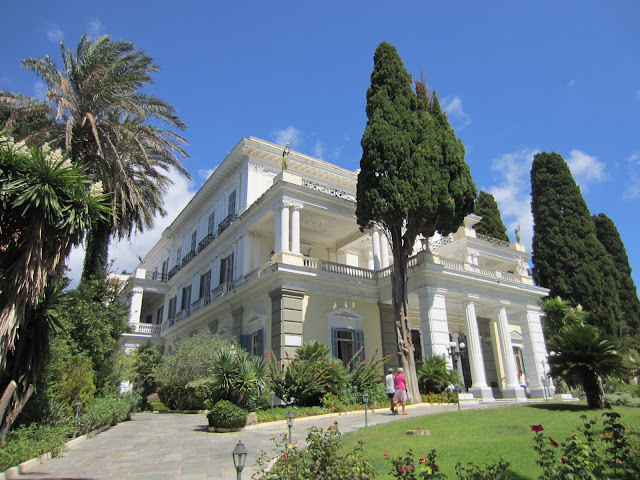 The palace was designed by Italian architect Raffaele Caritto and is a monument to platonic romanticism. Being a lover of the Greek language, heritage and mythology Elisabeth commissions the building of a palace around the figure of Achilles.The empress was found of the force and divine beauty of the Greek hero. In 1884 the German sculptor Ernst Herter receives the task to do the statue of “Dying Achilles”, probably the most beautiful and harmonious spot of the palace and its gardens. 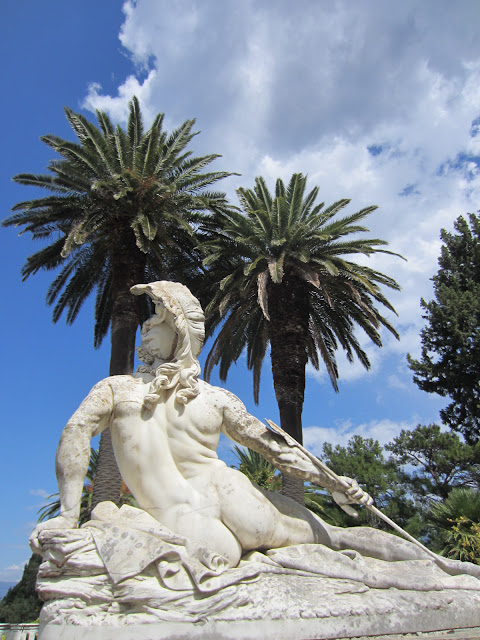 Achilles was hidden by his mother Thetes, who would burn him at night to make him strong and invulnerable and during the day, she would bathe him in the Lake of Styx. Without realizing a small part of his body managed to escape the water – the heel of his right foot from where Thetes would hold him. According to Homer, the God Apollo, helper of the Trojans during the war, told this secret to Paris who shot Achilles with a poison arrow with pin-point accuracy, not missing the vulnerable target – his heel. In the ‘Odyssey’ when Ulysses ventured into the Underworld, he met Achilles, who by now had become the ‘King of the Dead Souls ‘. Achilles’ recounted to him that he would prefer to exchange his new title with anything human – even to become the last slave on earth – so was his pain and anguish. In the sculpture, the agony and pain in his expression is clearly shown.

The palace is done in Pompeian style. One can be taken into an oniric trip around the lavishly decorated interiors, central staircase that culminated with a large fresco and an upper terrace&gardens flanked with classicist statues. 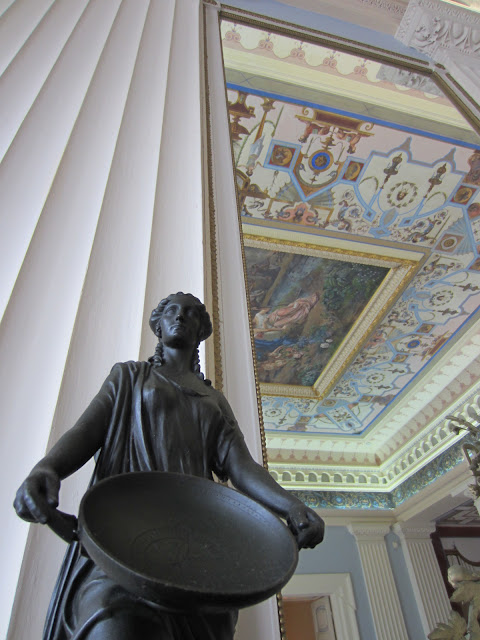 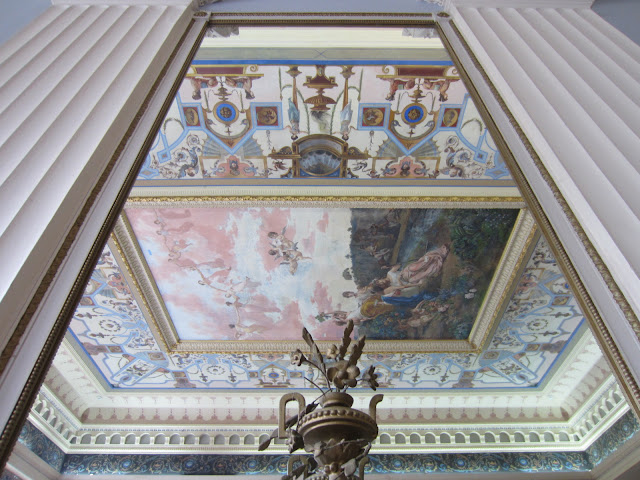 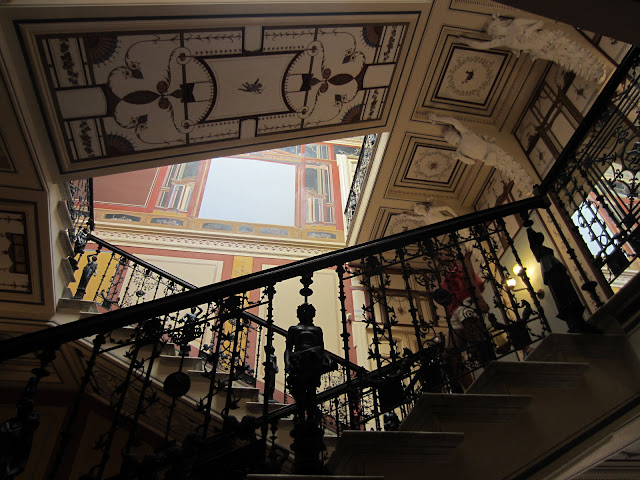 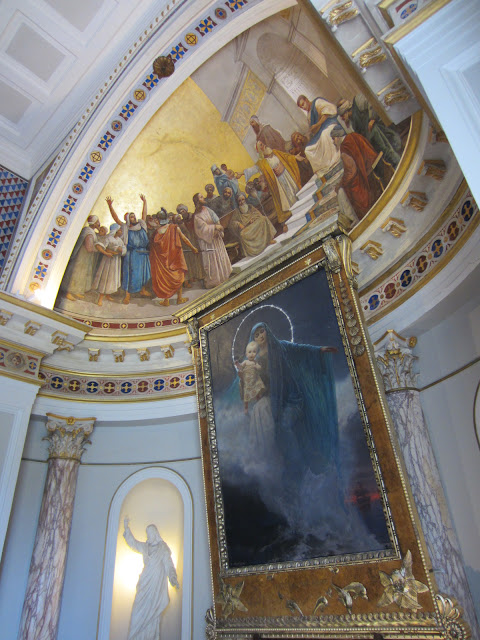 “The Triumph of Achilles” by Franz Matsch

Achilles is seen dragging Hector’s lifeless body in front of the Gates of Troy. 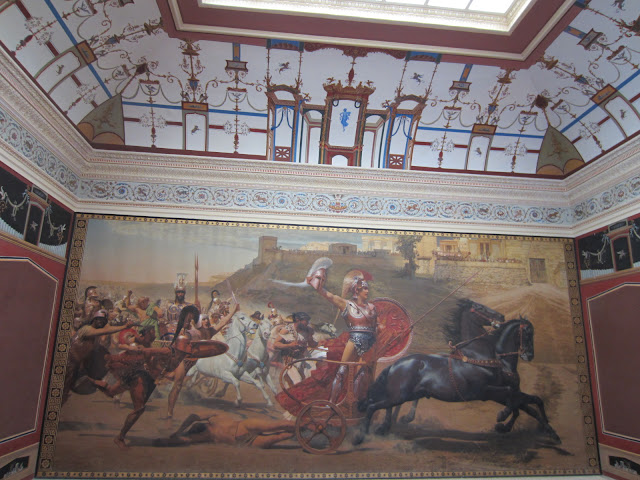 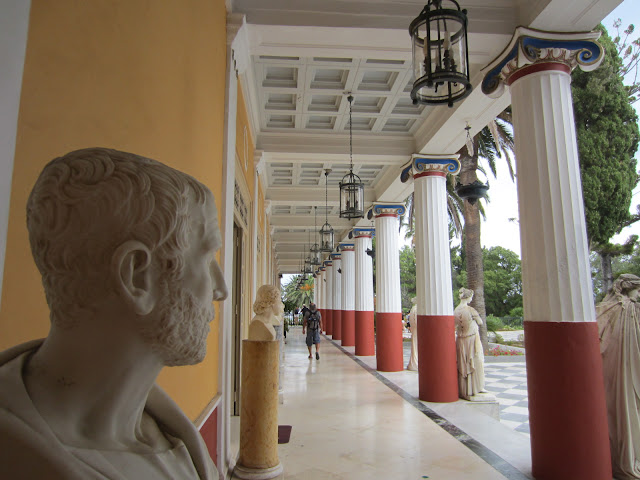 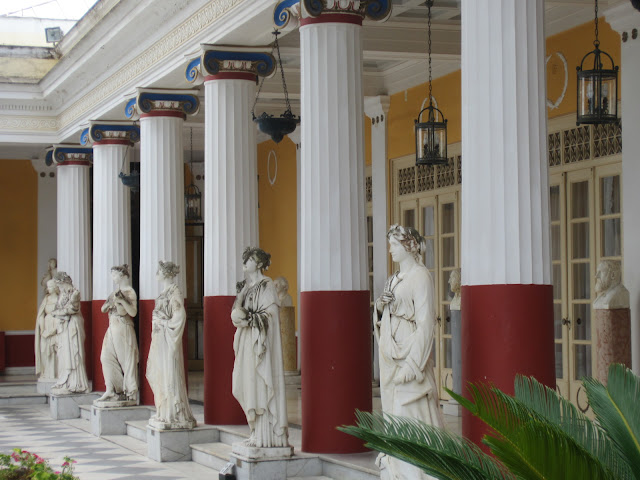 From Kings to 007 Action

After Elisabeth’s death the palace is bought by the German Kaiser Wilhelm II (1907). He likes the central hero but he wants his landmark on the garden’s landscape and thus commissioned his own statue of Achilles: taller, stronger, with a military like attitude. Starting with World War I the palace turns into a hospital, government offices, military headquarter, casino, museum and home for European summit meetings. The casino scene of the James Bond film “For Your Eyes Only” (1981) was filmed here. 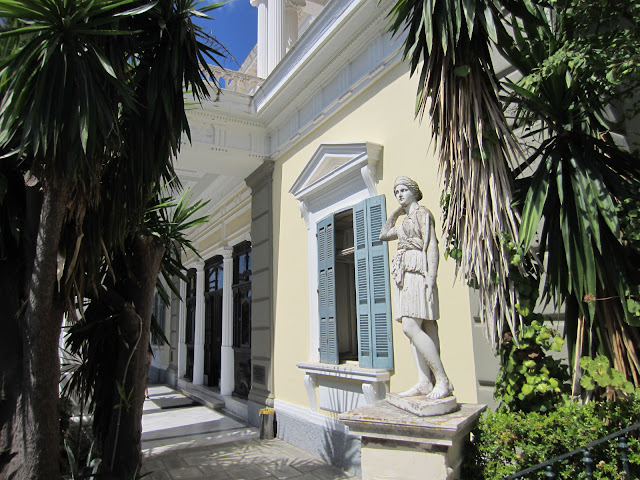 Situated at 10 km south of Corfu Town (Kerkira) in the village of Gastouri, the palace is open daily from 8 am till 7 pm (week days) and 8 am – 2.30 pm (weekends). Visiting it early in the morning or at lunch time might be a good idea in order to avoid the large crowds being downloaded from endless buses. 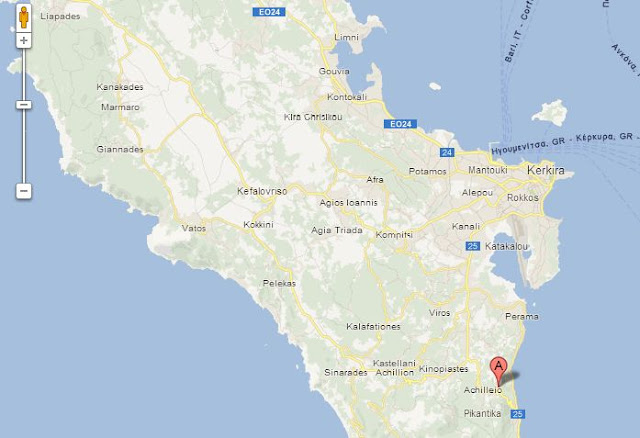